Mockler's Writing Resources  started as a private writing school  in 2017.

I no longer offer private coaching, mentorships, and workshops.

​But I still run a blog and share resources and writing tips. 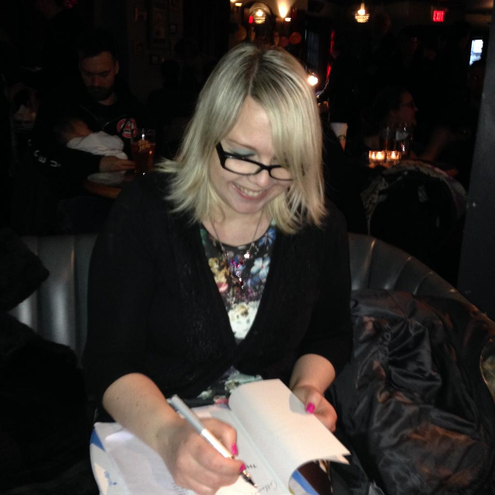 She currently teaches creative writing at Western University where she won the Angela Armitt Award for Excellence in Teaching.

The poetry and fiction she's published has appeared in Best Canadian Poetry, The Journey Prize, and has been nominated for a National Magazine Award.

Her undergraduate creative writing students have published in Vallum, Ditch, Poetry is Dead, The Malahat Review, and many other journals.

In 2005, she attended the Canadian Film Centre's Writers' Lab and wrote two short films for the NBC/Universal Short Dramatic Film Program. She has seven shorts films and videos produced to date.

Her work has been broadcast on TMN, Movieola, and Bravo and has screened at festivals such as the Washington Project for the Arts Experimental Media Series, Toronto International Film Festival, Palm Springs International Festival, Worldfest, Cinequest, and EMAF. Her films are distributed by Ouat Media, V-tape, and the Canadian Film Centre. She provides script analysis for major production companies and funding agencies in Canada.

She is the author of the books Watch Your Head (Book*hug, 2021), Some Theories (ST Press, 2017), The Purpose Pitch (Mansfield Press, 2015), The Saddest Place on Earth (DC Books, 2012), and Onion Man (Tightrope Books, 2011). Her writing has been published in Public Pool, The Butter, Vol. 1 Brooklyn, Found Press, and Geist. Currently, she is the Toronto Editor of Joyland: a hub for short fiction and the Publisher of the online literary and arts journal The Rusty Toque.
From Western News, 2012

​Whether in the numerous courses she has developed – Out of the Book: Creative Writing in the Digital Age and Renewing Your Poetic Licence – or in her mentoring of students, Mockler makes creative writing real. Her real-world sense of the value of writing means she’s as engaged in the classroom as she is at her own writing desk.
​
“One has to remember her teaching involves being critical of students’ most personal and prized creative endeavours,” Michael Milde, Arts and Humanities acting dean, said.  “She gives them a hard time – and they like it. That takes real skill.”